How Addiction Stigma Prevents People From Getting Help….from The Fix…

Home/How Addiction Stigma Prevents People From Getting Help….from The Fix…
Previous Next

How Addiction Stigma Prevents People From Getting Help….from The Fix…

How Addiction Stigma Prevents People from Getting Help 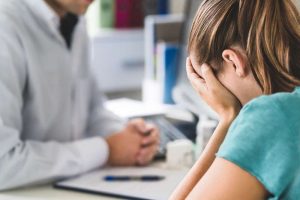 The doctor believed that people with addictions are sneaky and dishonest, and maybe this is why. My treatment has repeatedly been delayed or denied because I’ve been honest. Do other people have to lie to get medical care?
Woman with hands in hands, denied medical care because of addiction stigma
When you are addicted, you already beat yourself up every day. We certainly don’t need to be reminded by the people that chose a sacred profession and took an oath to help people that we aren’t worth it. ID 131140852 © Tero Vesalainen | Dreamstime.com
My name is Sara and I am 28 years old. I grew up in a two-parent household with a loving family, had excellent grades in high school, and graduated from college. I currently work full time. I love children, nature, animals, family, and my many friends.

Self-Medicating with Opioids
I have also struggled with depression, anxiety, and OCD since I was in my early teens. At age 18, my life was changed forever when I was prescribed an opiate painkiller after the removal of my wisdom teeth. I discovered, with that one prescription, that opioids made me feel normal. And yet, opioids are what put me through a roller coaster of hell for the next eight years. They also introduced me to my good friend “Heroin.”

From early on in my addiction, I wanted help but was too ashamed to ask for it. I also figured I could beat this thing myself, but I couldn’t. I needed help. My parents encouraged me to contact a rehab facility, which I did immediately. The nurse who did the intake was very kind and said I could come the next day to be admitted for detox, but she first needed to get approval from the insurance company.

I, and my family, were so relieved that I would begin a journey of recovery. This is when I experienced the stigma of addiction for the first time. The nurse from the rehab center called me back and said that my insurance company would not approve me to go to detox and rehab because I had not yet been incarcerated.

Several months later, I was finally approved for rehab, but only after I possessed a misdemeanor charge.

“Sneaky Drug Addicts”: Doctors Perpetuate Stigma
After detox, rehab, and a six-month stay at a sober living facility, I came home and began looking for work. I found a job quickly, but I needed paperwork completed for a physical. Although the job did not require a drug test and there was nothing on the form requesting drug testing, my primary care provider refused to give me a physical or sign the form unless I agreed to a drug test. It didn’t matter that I was in recovery and was also attending outpatient rehab which routinely drug-tested me.

Even now, with two years in recovery from addiction, I still experience prejudice and stigma in health care settings. Recently a bout of severe food poisoning and dehydration sent me to the emergency room. There, I was accused of going through withdrawal. I provided the nurse with the list of my medications, which included Vivitrol—an opioid blocker. I was also honest and told her that I used marijuana occasionally to help with anxiety. After I was sent for testing in Radiology, the doctor told my mother that he was quite sure that I was going through withdrawal and that he wanted a urine screen. My mother told him that she was sure I wasn’t going through withdrawal because I had always been upfront and honest with her when I relapsed in the past.

“Well, you know how sneaky drug addicts can be,” the doctor said.

When I returned and the doctor told me his suspicions, I agreed to the urine test but told him that I expected an apology after he got the results and I only tested positive for marijuana. I watched as two nurses outside the room laughed and looked toward my room. I knew they were laughing at me—the drug addict.

Half an hour later, the doctor walked in and said, “Well, I guess you were right, you aren’t going through withdrawal. We only found a small trace of marijuana in your system. But, you understand why I had to test you, don’t you?”

He never did apologize to me.

In Recovery and Denied Therapy
Part of my recovery is getting a monthly injection of Vivitrol which is an opioid blocker that also helps reduce my cravings. The provider that gives me the Vivitrol requires that I also go to a counselor, which I was more than willing to do. But at my intake interview at the local mental health agency, I was honest about my occasional marijuana use for anxiety and as a result I was denied counseling services. I even appealed it to the medical director, but that didn’t help. It didn’t matter to them that the anxiety, depression, and OCD—which is relieved by the marijuana—may have been partly responsible for my addiction to opioids in the first place.

That ER doctor held the belief that people with addictions are sneaky and dishonest, and maybe this is why. My treatment has repeatedly been delayed or denied because I’ve been honest. Do other people have to lie to get medical care? If someone is sent to a counselor for emotional eating, are they refused counseling if they have given up everything but potato chips? And even if the providers believe smoking marijuana is a condition of addiction, wouldn’t that be all the more reason to offer me care and a provider? To this day, I have been unable to find a counselor who will take me.

My wish is that every person who has substance use disorder is treated with respect and compassion. When you are addicted, you already beat yourself up every day. Every time you look in the mirror, you see an addict. We certainly don’t need to be reminded by the people that chose a sacred profession and took an oath to help people that we aren’t worth it. That only puts us deeper in the depths of destruction rather than building us up for a path to recovery.

Healing: Compassionate Health Care Providers
My experience isn’t unusual, but I have also encountered many health care workers who were compassionate. Those were the people who gave me a reason to keep fighting for my life. There was a nurse in the emergency department (the one time I was there to get help for withdrawal after I had relapsed) who gave me a big hug when I was leaving and said, “Don’t give up. Keep trying. You are worth it.” And then I watched as she hugged my mother as she sobbed on her shoulder.

“I know it’s scary, Mom, but she will get through this. The good thing is, she wants to get help,” she said.

Another nurse told me how proud she was at how far I’ve come and not to take other people’s biases to heart. And then there was my Health Home Nurse — she just works her magic and does whatever’s needed to help you stay in recovery. She is nothing short of amazing and I owe my life to her. Those are the people who make me want to continue my recovery and the ones I will be thankful to for the rest of my life.

I am Sara. I am a survivor who is recovering from substance use disorder. I could be your daughter, your niece, your granddaughter, your next door neighbor, or your co-workers daughter. I am worthy of being treated with respect and compassion just as much as every human being struggling with this disease is worth it. With the right kind of support, people can and do recover.

Note: My mother, who has worked in the healthcare industry for over 30 years, has been frustrated witnessing firsthand the stigma I’ve faced when trying to obtain care and services. She’s often had to advocate on my behalf. She currently volunteers with an organization called Truth Pharm, which works with local providers to reduce stigma in healthcare settings. She asked if I would be willing to share my story, and that’s why I wrote this.