Does Everything Actually Happen for a Reason…from The Fix…

Does Everything Actually Happen for a Reason…from The Fix…

Does Everything Actually Happen for a Reason?
By Christopher Dale

“Everything happens for a reason” conflicts with AA principles: it misleads recovering alcoholics into thinking they are special—that they are somehow more worthy of salvation than the addict or alcoholic who perished.
Skeptical woman in recovery wondering if everything happens for a reason
He took Prince, Amy Winehouse and Philip Seymour Hoffman, but left… you? Forgive me if I find that conceited. 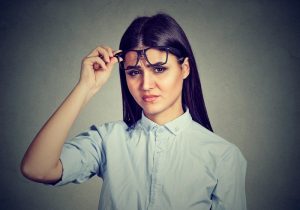 That was me, in my typically understated fashion, explaining to a newly recovering alcoholic why he shouldn’t heed the single silliest phrase permeating the rooms of Alcoholics Anonymous: “Everything happens for a reason.”

In my seven-plus years attending AA meetings, I’ve come to know and loathe my share of cliché recoveryisms. For example, to me, “Let go and let God” overshoots otherwise sound advice against trying to control everything into a place of irresponsible complacence. “If you spot it, you got it” blames an observer simply for noticing wrong behavior or thinking, while “All of us only have today” weighs equally the experience, strength and hope of a wise old-timer and a wild-eyed newcomer. We don’t all just have today—we have all the days before it.

And it is baffling why the Our Father—a prayer praising a conventional paternalistic, heaven-dwelling religious deity—still closes many meetings, as it directly contradicts the organization’s stated non-alignment with any sect or denomination, per its Preamble.

So yes, AA phraseology has its share of eye-rolling headscratchers. But none are as cringe-worthy and counterproductive as the concept that every single thing that transpires in life does so as part of a grand, predestined scheme.

In an everyday setting, “Everything happens for a reason” can be brushed aside easily enough. Outside the realm of recovery, it becomes little more than a difference of opinion; your churchgoing aunt believes God is in heaven treating us like marionettes, while you prefer a puppeteer-free existence. To each his own.

However, AA’s penchant for preordainment is particularly problematic, due to the specific forum in which it is propagated. In a recovery setting, the notion that all occurrences— good, bad or indifferent—are part of some predetermined master plan is a double-edged sword that does a disservice to all involved, believer and nonbeliever alike.

Unreasonable Expectations
Let’s start with those in my column: recovering alcoholics who, though they may embrace a spiritual higher power—a rhythm of the Universe, let’s say, don’t ascribe to a god that directly intervenes in our lives. If you wonder why athletes thank the Lord after a big win, you’re in my boat. Call it the “God doesn’t score goals” perspective.

When people who don’t believe in an interventionist deity are told to see the hands of God in everything, there is no common ground. Many of us, myself included, were stone-cold atheists upon entering AA; some of us, myself not included, still are. A healthy agnosticism is the best many of us can muster while—and this point is crucial—retaining a recovery-capable level of self-honesty. Few stay sober by lying to themselves about something as mission-critical as spirituality.

Upon entering AA, we were assured by both literature and longstanding members that our spiritual skepticism was fine, as long as we were willing to put faith in some sort of higher power. Many of us took Step 2 with the group itself in that role and, in Step 3, turned our will over to… well… something as best we could without the whole endeavor feeling so forced that it forced us out the door.

And then… “Everything happens for a reason”? That’s a bridge too far­—and one apt to collapse carrying newcomers who are left feeling betrayed by the agreed upon rules of repeated spiritual engagement. It also leads to inferiority complexes, when these newcomers compare themselves to AA members who seem to take God’s Great Chess Game of Life at face value.

Replacing that collapsed bridge is a wall. There’s no kind way to say this: Many people who don’t believe everything happens for a reason find those who do simultaneously pretentious and unsophisticated—an oxymoronic mélange of know-it-all-ism and naiveté. When I hear someone in AA insist upon God’s almighty plan, it makes me respect what they say next significantly less.

And no, comment thread, that isn’t my arrogance—it’s the phrase’s. “Everything happens for a reason” is a condescendingly cocksure nonstarter that cleaves members off from each other. Worse, it does so completely unnecessarily, since its veracity is entirely irrelevant to the greater principles and practices of AA’s primary purpose: recovery from alcoholism and addiction.

How many newcomers, I often wonder, have gone back out and died because they didn’t realize “Everything happens for a reason” is by no means AA dogma, but rather AA dog… something else. Even one is too many.

No Good Reason
In Alcoholics Anonymous, “Everything happens for a reason” conflicts directly with the program’s principles. It does so by misleading recovering alcoholics into thinking they are special—that they are somehow more worthy of salvation than the addict or alcoholic who perished. The result is a sort of unintentional hubris that flies in the face of sobriety-bolstering ego deflation.

By implication, declaring yourself selectively saved by an all-intervening God acknowledges that this same deity let others perish. He took Prince, Amy Winehouse and Philip Seymour Hoffman, but left… you? Forgive me if I find that conceited.

On a macro level, I also find it insulting. This Calvinistic approach to human existence means God assents to tsunamis, earthquakes, war crimes. If you sincerely believe that God greenlighted the Holocaust, I simply don’t have much to say to you. Again, this notion of intra-organizational separation is all caused by a concept completely unnecessary to that organization.

Unfortunately, a major obstacle in all this is utter obliviousness. From where I’m sitting, the vast majority of those who espouse, ad nauseam, that “Everything happens for a reason” do so from custom rather than castigation. By and large, religion—or, rather, a sophomoric interpretation of religion—has weaned them to believe they are somehow saved, chosen or otherwise privileged. There is an entrenchment to this flawed view of eminence that makes it as intractable as it is unpalatable.

In this manner, “Everything happens for a reason” is an unreasonable phrase often repeated for no good reason other than a “sure, why not” reluctance to challenge outdated thinking. It’s one of those grandfathered-in phrases that should be retired, along with the uber-sexist “To Wives” chapter in the AA Big Book.

In late 2011, as a 32-year-old just drying out off a DUI and with a wife halfway out the door, AA’s preordainment problem nearly made me explore other sobriety options. This would have been a mistake, considering how well-suited the literature, the 12 steps and the fellowship turned out to be for my recovery.

It is in line with this concern—attracting and retaining newcomers—that a concerted effort should be made to retire “Everything happens for a reason” from the rooms of AA. And I for one believe that doing so depends entirely on our efforts, not God’s plan.