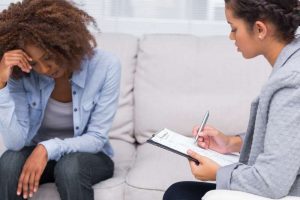 It was a therapist who first told me that I wasn’t in therapy because I was bad and out of control, like my mother said; I was in therapy to learn how to deal with having an emotionally unstable mother.

My mother believes everyone needs therapy. And she’s right, they do. After being around her. Everyone, that is, except her. Don’t be like my mother, requiring the world to change around you. (It won’t.) And don’t be like my Dad either, who tells me I’m overreacting every time I have an emotion. Don’t be like me, either, an asshole exploiting her parents for profit. Wait.

Do you need therapy? Probably. Could you benefit from therapy? Definitely. Can you afford therapy? More easily than you think. Many therapists keep sliding scale spots open in their practice, for those who need help but don’t have health insurance or a large income. I found my current gem of a therapist through Open Path Collective, a network of clinicians who offer therapy at a rate of $30 to $60 per session for individuals.

It was a therapist who first told me that I wasn’t in therapy because I was bad and out of control, like my mother said; I was in therapy to learn how to deal with having an emotionally unstable mother. And I didn’t talk too much and ask too many questions; actually I was curious, the therapist said, and had a lot to say.

It was a therapist who said: “I can’t see you and your husband at the same time, the relationship is too damaged and he just shuts down and threatens to end it.” The same therapist asked “Are you drinking every single night?” And, “Have you tried AA?” And when I couldn’t get myself to stop or go to AA, she found a rehab, called my parents, and helped make all the arrangements from her office.

It hasn’t been all Aha! moments and cleansing cries on couches though. I’ve had a couple of negative experiences. None, however, were as negative as the summer I tried to therapize myself on my own with just books. That experiment ended with me smoking crack for the first time, shooting up heroin while smoking crack (neither of those were my thing, but that summer!), and my first DUI.

Maybe you’re surviving – but you could be thriving.
It might be helpful to look for a therapist who specializes in addiction or whatever you believe your specific issues are, but it’s not necessary. Your intuition is your greatest asset in your search. If you don’t like your therapist, leave and find another one. Repeat until you have the seven experiences I describe below.

1. Your emotions are validated.

Therapy helps you accept that your emotions are valid, something our culture certainly doesn’t want you to do. Allowing yourself to feel your feelings is an underrated gift. Your emotions may seem out of proportion to the event that caused them, and that’s okay. You learn that they are actually a response triggered by the event to a deeper, older wound. You will learn, as the poet Rumi said, to “meet them at the door laughing and invite them in.”

2. You get to talk about anything you want.

This is one of the most exciting things with a trusted therapist, thinking what would I like to discuss today? The toxic friendship I want to find the courage to give up; that awful conversation with my dad; or do I want to recount everything that happened this week? It’s all up to you! You can plan it in advance, and you don’t even have to stick to the plan, you can talk about whatever comes up! Where else do you have this kind of freedom, where you don’t have to dance around sensitive issues, where there is no fear of being judged that isn’t your own projection, where you are safe, completely safe, to talk about the most trivial and most traumatizing of issues? What joy! The time is truly yours.

3. You don’t have to caretake or worry about anyone else’s thoughts or feelings.

If you aren’t worried about your friend’s thoughts and feelings at all and constantly dump your problems on them, quit being an asshole. That isn’t their job, even if they think it is. The only thing addicts are better at finding than their drug is codependents. Your therapist is one of only people in the world with whom you don’t have this burden. This doesn’t mean you should abuse them, just that you don’t have to worry if they are sick of hearing about your dumb boyfriend again.

Therapists are masters at the art of holding space. They are fully with you as you explore the pains and confusions of life. You are never too much, never unacceptable. You just are. We live in a culture that doesn’t teach anything unconditional, least of all love and presence. People have to learn how to do it. Your therapist knows how, and it is their job to provide this for you. Your therapist isn’t invested in pushing the journey to a certain place for their own benefit. They are just there to walk with you along the way. My therapist held that space and accepted me until I could learn to accept myself. When I beat myself up after another relapse, she didn’t join in. Her unconditional presence and nonjudgmental interest helped me to finally break that pattern.

5. You’re given the space to work out your problems on your own.

Therapists aren’t there to solve your problems for you. They are impartial witnesses, bringing a gentle, open, and noncritical attitude to your experience. It’s the exact opposite of my childhood. I can tell you from experience that nothing feels better than figuring out a problem on your own, with someone with no skin in the game standing by as a witness, someone who only wants to see you do well and who isn’t going to scold you when you fall (but will encourage you to explore why).

6. They notice, and can help point out your patterns.

After I stopped obsessing about a man who treated me carelessly, my therapist pointed out that I had a pattern of acting as if sex was all I had to offer and offering it to people who didn’t deserve it. I remember the moment because she said it so gently, as a question, and then she paused. She knew to bring it up only after I had described a scenario which shown I had grown in self-love and respect. It blows my mind how she is able to hold back until the moment is right. I had a previous therapist who I never let get a single word in, and when I finally asked after a year, “What do you think?” She said, “I thought you’d never ask!” She told me that she had been planning to bring it up soon, but that she sensed that it was going to take what it took for me to learn to trust her.

Before we can change anything, we first need to get to a place of safety. I breathe a huge sigh of relief every time I walk into my therapist’s office. There is nothing more important than feeling safe. And it is so rare in this world, in this time. To paraphrase the great Eddie Pepitone, “It’s a sign that a society is falling apart when murder is entertainment, though the Ted Bundy special was very good.” I can’t think of anyone I know who hasn’t had their car broken into, or their body broken into, or their mind hijacked by the needs of another who didn’t see them as real. Therapy is a true safe space. And in therapy, you can learn to create safe space within yourself, which is something nobody can take from you.

In conclusion, get a therapist. I mean it. What are you waiting for? Give your friends a break. Learn to see your parents as flawed humans who did the best they could. Lean on your sponsor for no more and no less than they can handle. Get. A. Therapist. You don’t have to stay stuck anymore, you don’t have to keep hurting yourself with a million tiny infractions. Help yourself. Allow yourself to be helped.